Ashkenazi-Levite Jews and their Iranian origin

Ashkan
This is an Iranian name that is still in existence, for thousands of years. And I believe the term "Ashkenazi" is ultimately derived from the Iranian name "Ashkan".


More than 2000 years ago after the eastern conquests and death of Alexander the Great, the Parthian Empire emerged stretching from Balochistan to the Levant. 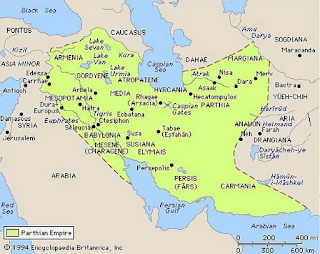 According to the bible a 'Kingdom of Ashkenaz' existed. Together with Ararat, Minni (Mannaeans), and the Medes they prepared for war against Babylon (Jeremiah 51:27-28). It is possible that 'Ashkenazi' became a generic term for Jews who migrated northward into the Parthian Empire, given the assumed location of the Kingdom of Ashkenaz.
The proposed lineage tree of the Ashkenaz is also described in the bible: Ashkenaz belongs to the "Japhetic" branch, not to the Semitic one. BTW, the Hebrew language belongs to the Semitic language family.

In the bible Noah had three sons: Shem (Semitic), Ham (Hamitic), and Japheth (the rest of the known world). So, the word Shem refers to both, Noah's son and the father of all Semitic people. Gen.10 declares the following nations as semitic.

Asshur and Aram refer to Assyrians and Arameans, respectively.

Noah's other son Japheth had also children.
Gen10:
2 The sons of Japheth; Gomer, and Magog, and Madai, and Javan, and Tubal, and Meshech, and Tiras.
3 And the sons of Gomer; Ashkenaz, and Riphath, and Togarmah."

So Ashkenaz is Gomer's son, and Gomer is Japheth's son.

Gomer is regarded as a synonym for people who lived in Anatolia in that time, either Cimmerians, Gauls in Anatolia (Galatians/Celts) or people from Cappadocia, the literature has not decided yet.
Ashkenaz is also regarded as synonym for Skythians or Saka. Much much later in Medieval Times, 'Ashkenaz' was the Hebrew word for 'Germany'.

The ancestors of Ashkenazim may actually lived in Northern Mesopotamia for many centuries before moving into Europe, especially into the Rhineland as merchants. Given that most Ashkenazi Jews left Israel after the Roman conquest and they do not seem to appear in Europe until Charlemagne's time (800 AD), they must have lived somewhere else prior to that. I think it is reasonable that the ancestors of Ashkenazim were Aramaic speakers who lived in the Parthian Empire.

So, is it possible to see some Iranian admixture in Ashkenazi Jews of today?

Within the Top30 you can find plenty Iranians including the Iraqi Kurdish individual H1483 that was also described here.