Drawing recently discovered near Khomein show among other engravings a person riding a horse with archery. Based on Dutch archeologists some of the engravings are up to 40,000 years old.
Link1, link2. 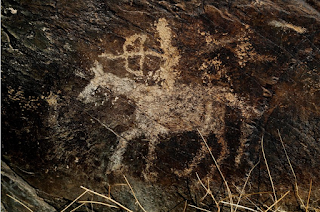 Today, I want to dig a little bit more into the genetics of lactase persistence. The goal is still to identify unknown MCM6 haplotypes in Middle Eastern populations that could lead to lactose tolerance and to identify the root of the known MCM6 haplotypes that result in lactase persistence.
Previously, I postulated the following phylogentic tree for the MCM6 gene (based on 23andme data): 
The European T(-13910) and the earlier identified East African G(-13907) LP allele share the same ancestral background and most likely the same history, probably related to the same cattle domestication event. In contrast, the compound Arab allele shows a different, highly divergent ancestral haplotype, suggesting that these two major global LP alleles have arisen independently, the latter perhaps in response to camel milk consumption. These results support the convergent evolution of the LP in diverse populations, most probably reflecting different histories of adaptation to milk culture.

Previously, I showed that Kurds, Iraqi Jews and Pakistanis have ht2. Now, I could show that ht2 is also present in Arabs from the Middle East and the Kalash. I determined frequencies of these haplotypes based on data from Enattah et al., 2008.
I also added the Kurdish data to this table. You can download the table here: 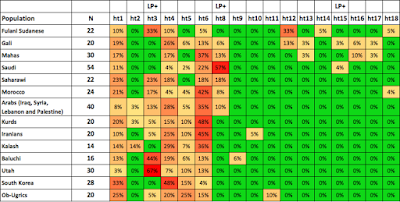 In Eurasia, the vast majority are ht1 to ht6. In Africa, the MCM6 gene is more diverse.
Not surprisingly, Kurds show similarities with Iranians in their MCM6 repertoire and frequencies.

Since these haplotypes are just based on 9 SNPs they are less reliable, I decided to expand the number of SNPs gradually. To define further SNPs of the Saudi-Arabian lactase persistence I asked several Saudi-Arabians to participate in a small survey. I could confirm that the Saudi-Arabian lactase persistence (ht8) is derived from ht5 and correlates with the expected phenotype (=lactose tolerant). I also observed ht13 in one individual and added both data (ht8 and ht13) in the expanded list of SNPs that can be checked on 23andme. The other haplotypes are extracted (ht9-12, ht14-18) are extracted from Enattah et al., 2008. 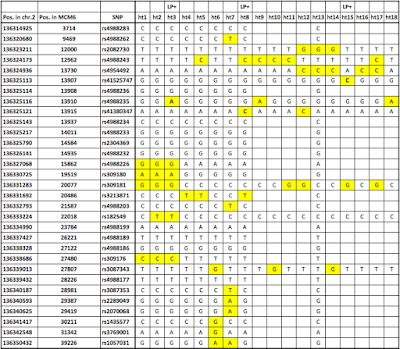 Related post:
Lactose intolerance: Six MCM6 variants in the Kurdish gene pool / Why 22018A is strongly, but not completely related to lactase persistence

Lactose Tolerance
Posted by Palisto at 12:30 PM No comments: