Today, a new paper came out questioning the OOA hypothesis.

The split of our own clade from the Panini is undocumented in the fossil record. To fill this gap we investigated the dentognathic morphology of Graecopithecus freybergi from Pyrgos Vassilissis (Greece) and cf. Graecopithecus sp. from Azmaka (Bulgaria), using new μCT and 3D reconstructions of the two known specimens. Pyrgos Vassilissis and Azmaka are currently dated to the early Messinian at 7.175 Ma and 7.24 Ma. Mainly based on its external preservation and the previously vague dating, Graecopithecus is often referred to as nomen dubium. The examination of its previously unknown dental root and pulp canal morphology confirms the taxonomic distinction from the significantly older northern Greek hominine Ouranopithecus. Furthermore, it shows features that point to a possible phylogenetic affinity with hominins. G. freybergi uniquely shares p4 partial root fusion and a possible canine root reduction with this tribe and therefore, provides intriguing evidence of what could be the oldest known hominin.

In this study, we propose based on root morphology a new possible candidate for the hominin clade, Graecopithecus freybergi from Europe. Graecopithecus is known from a single mandible from Pyrgos Vassilissis Amalia (Athens, Greece) [38] and possibly from an isolated upper fourth premolar (P4) from Azmaka in Bulgaria [39] (Fig 1A and 1B). A new age model for the localities Pyrgos Vassilissis and Azmaka, as well as the investigations on the fauna of these localities [40] confirms that European hominids thrived in the early Messinian (Late Miocene, 7.25–6 Ma) and therefore existed in Europe ~ 1.5 Ma later than previously thought [39]. This, and recent discoveries from Çorakyerler (Turkey), and Maragheh (Iran) demonstrate the persistence of Miocene hominids into the Turolian (~8 Ma) in Europe, the eastern Mediterranean, and Western Asia [41, 42].

Today, I obtained genotype data comprising MCM6 SNPs from HapMap for 2436 individuals from 26 HapMap populations (ESN, GWD, LWK, MSL, YRI, ACB, ASW, CLM, MXL, PEL, PUR, CDX, CHB, CHS, FIN, GBR, IBS, TSI, CEU, BEB, ITU, JPT, KHV, PJL, STU, GIH). Haplotype annotation of each individual can be downloaded here. I focused on all the SNPs that show more variation (more than 1% of the alternative base). I excluded all SNPs that have varying numbers of bases (insertion/deletion), and I excluded rs4988274 and rs55809728 because they did not show a clear pattern (hypervariability?). I excluded all haplotypes that were only present in 2 or less individuals. Using the remaining 203 SNPs I was able to identify 76 haplogroups. Please note that there are many more haplotypes (especially in Africa); I just focused on most common ones as stated above. Please also note that I changed the nomenclature at this stage because the following three reasons:
1. Some of the populations identified in Enattah et al., 2008 are not present in the HapMap dataset. Thus, some of the identified haplotypes in Enattah et al., 2008 are missing here.
2. Because this time I used more SNPs most of the haplotypes split into several haplotypes:
ht1=> ht17-30 (blue)
ht2=> ht31 (turquoise)
ht3=> ht32 (turquoise)
ht4=> ht59-73 (orange)
ht5=> ht74-76 (red)
ht6=> ht49-57 (green)
ht13=> ht46-48 (brown)
ht16=> ht45 (cayenne)

Additionally, I observed some other groups:

3. I wanted to sort the haplotypes based on the phylogenetic tree.

I also checked the data of Denisova and Neanderthals for these 203 SNPs, and predicted the missing SNPs.

Find below the phylogenetic tree of the 76 MCM6 haplotypes including Denisova and Neanderthals. 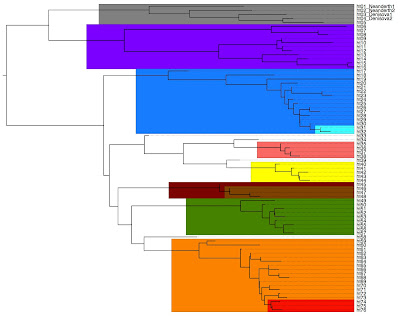 SNPs of 76 haplotypes including the Denisova and Neanderthal SNPs (predicted ones in grey) and frequencies of all 76 haplogroups can be downloaded here (with summary at bottom).


Distribution of the main branches of MCM6: 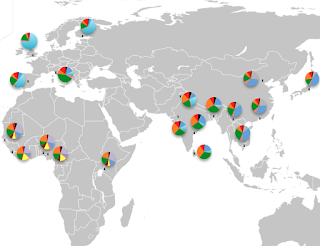 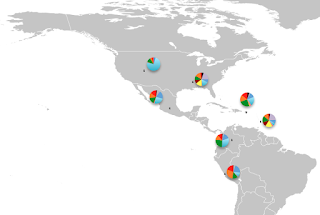 Every branch of the phylogenetic tree of MCM6 tells its migration story. Based on the generated data I will try to postulate the steps of these migrations.


Grey branch (Denisova/Neanderthals/previous and current ht5):
ht5 is derived from the Denisova genome. The frequency of the ht5 suggests that the admixture Denisova and our ancestors occurred in Asia, which is in accordance with the current state of scientific knowledge. 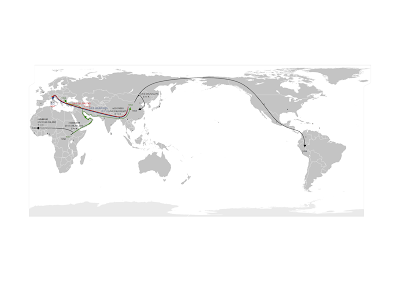 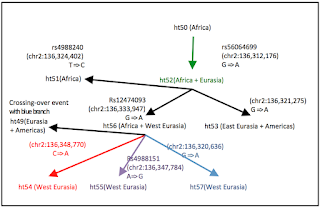 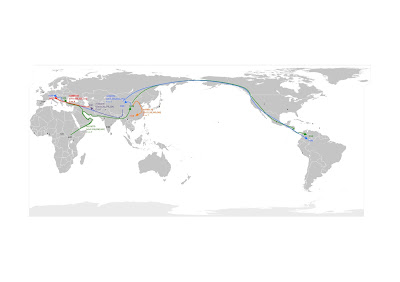 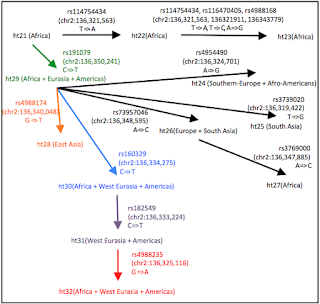 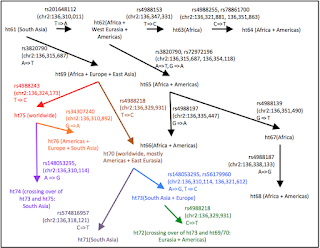 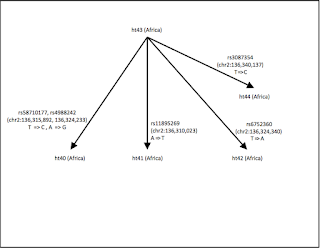 Update May 7th, 2017:
Kurd from anthrogenica.com helped me out to collect some more data. Thanks!

Posted by Palisto at 2:34 AM No comments: