The origin of domestic livestock (Goat, sheep, pig, cattle) started in the Middle East at least 10,000 years ago and spread from there all over the world. In the scientific publication “Domestication and early agriculture in the Mediterranean Basin: Origins, diffusion, and impact,” by Zeder et al., 2008, a comprehensive map is shown highlighting the historical importance of this region for mankind and its current diet. 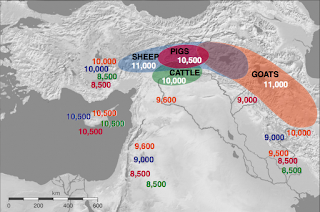 The change of the diet from hunter/gatherers to farmers impacted not only the genetics of crop and livestock but also the genetics of humans. The most known and best described change is the ability of digesting and thus tolerating of milk as a food product, not only as infant but also as adult. Lactose, the sugar of milk, is the critical ingredient in milk that defines if someone can digest and thus tolerate milk or not. The responsible enzyme for digestion of lactose is called lactase, an enzyme that is highly expressed at early age in the small intestine and down-regulated after weaning, that's why adult hunter/gatherers are intolerant towards milk (lactose intolerant), while farmer populations can tolerate milk (lactose tolerant).

Dairy products (milk, yogurt, cheese) play an important role in the diet of the Iranian and Kurdish people, probably for thousands of years. It should be noted that Kurdish dairy products mostly rely on sheep and goat milk, while in Arabia camels were the main source of milk. In Europe bovine milk is dominating. Due to the size of camels and cattle it is very likely that Bedouins and Europeans consumed more dairy products than e.g. Iranians.


Note: The actual gene for the enzyme lactase is called LCT and it is close to the gene MCM6. The MCM6 gene region seems to be important for the gene regulation of the LCT gene. 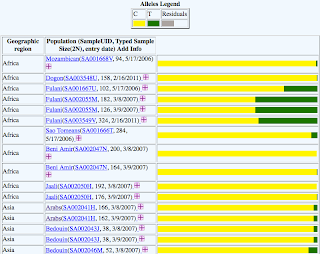 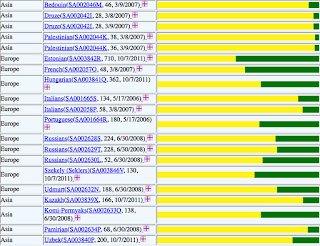 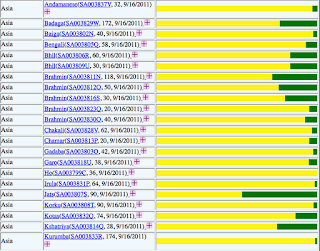 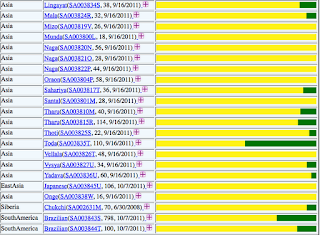 Yuval Itan presented a nice map in his dissertation regarding the worldwide frequency of  C-13910:


So, where can we find more data about other SNPs that are related to lactose tolerance in the Middle East? 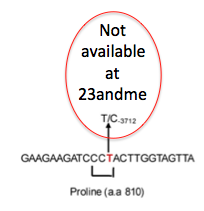 The allele frequency of these SNPs in the Middle East (from Enattah et al., 2008):

Based on these data it seems that the major SNPs for Saudi-Arabian lactose tolerance are found:
1. It is T/G-13915 + T/C-3712, both SNPs always occur in pairs, which shows the strong positive selection for lactose tolerance and the common origin of both SNPs.
2. Even though 23andme is just determining T/G-13915 but not T/C-3712, it's okay because the two SNPs always come as pairs. 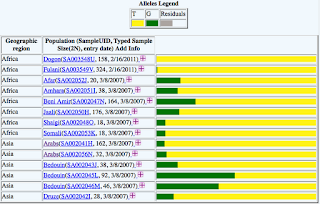 Yuval Itan presented a nice map in his dissertation regarding the worldwide frequency of T/G-13915 and two more African SNPs known to cause lactose persistence:

Here is another map summarizing all known lactose persistence SNPs and their worldwide frequencies: 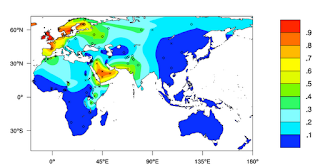 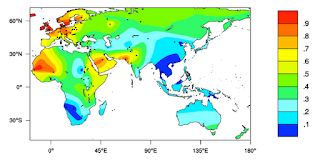 
One way to discover the relevant regions in the human genome for such SNPs in the Middle Eastern genepool is by family studies:
If some of your family members are lactose tolerant while other family members are lactose intolerant and if you have enough 23andme results of both groups within your family, you might be able to pinpoint the genomic region by exclusion of not relevant genomic regions.
Posted by Palisto at 7:34 PM