The color of the eyes: at least 17 HERC2 variants in Human gene pool

Today, after analyzing the Kurdish gene pool for HERC2 and the Eurasian gene pool for HERC2 I want to add the third post in the HERC2 trilogy. I analyzed additional data from other parts of the world and discovered 10 more existing Human haplotypes and one extinct haplotype in Neanderthals.

All the HERC2 haplotypes of humans, Neanderthals, Denisova and many mammals can be found in the spreadsheet I generated.

Below is a rectangular tree of these haplotypes (ht1 and h2 give light eye colors): 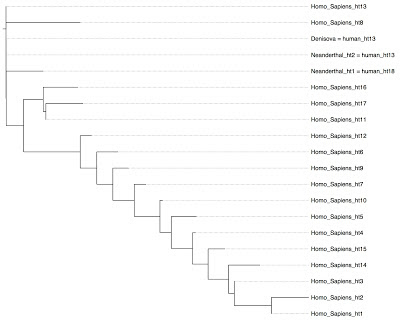 The highest variability of HERC2 can be found in Subsaharan Africa and in mixed population of the New World (African American, Dominican, Colombian, Puerto Rican).