The color of the eyes: 7 HERC2 variants in the Kurdish gene pool

My goal is not only look at the rs12913832 SNP itself but to determine the number of DNA segments that carry the SNP rs12913832; the goal is to determine the number of HERC2 variants (=number of different HERC2 segments) in the Kurdish gene pool. 23andme (and other companies) have a chip-based analysis approach, thus, the genetic read-out only contains data about the single SNPs but not in relation to other neighboring SNPs. The only way to determine DNA segments is to have genetic data of multiple close relatives.

This example was only based on two SNPs but it is more interesting to cover a larger DNA segment consisting of all tested SNPs of the HERC2 gene (at least all the SNPs tested by 23andme).

The SNP data of the HERC2 variants are presented in the spreadsheet.

HERC2 SNP results of all tested Kurds can be described by combining 2 of the 7 HERC2 variants.

Next, I generated a phylogenetic tree of the 7 HERC2 variants. Branch#7 is the most ancestral branch. The two branches that result in light eye colors (Branch#1 and Branch#2) are closely related and descendent from Branch#3. 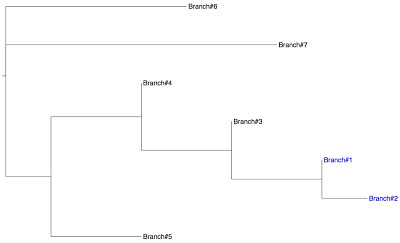 Percentage of Kurds in each HERC2 branch

In the spreadsheet I now added all potential combinations of the 7 variants in a separate sheet.