Today, I want to update the STR111 tree of R1a1a that I have presented earlier here and here. I have now collected a much larger number of samples, which makes the tree more complex. Since a lot of individuals in this tree are in the R1a1a and subclades project, I added the group name of all these individuals. Of course, this tree is based on STR data only, so the initial branching of the different SNPs can be off, e.g. Z93+ is split into multiple clusters. However, some clusters are fairly robust in terms of structure and subbranching. 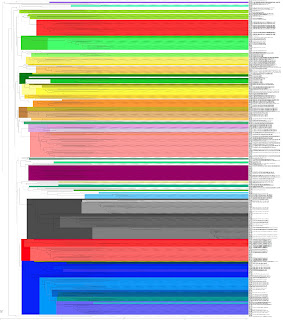 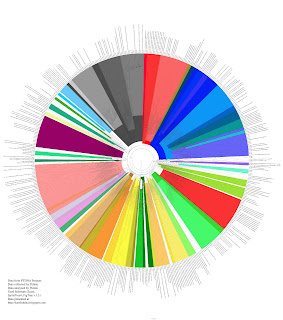 Due to the size of the tree I split the tree into pieces. Let's look into the details:
As mentioned the initial branching in the STR111 tree is pretty messy with no clear clustering but overlapping of various SNPs. At least N86494 from Belarus with M417- ended up in the pole position. Besides very small clusters from Ireland and England and a mix of Z93+ individuals (L657+ and L657-) from Central Asia and Middle East, the first clear cluster in this tree is "4. A2. Z283+ M458+ L260+ Central European branch, West Slavic subclade", most individuals are from Poland.

Next, we have no real clustering but a mess...

Next, we have a mix, no real clustering.

Next, we have Z284+ individuals forming a cluster:

Next, we have the L664+ individuals forming a large nice cluster. Based on the current R1a SNP tree, L664+ was a very early split.  Most of these individuals are from the UK and Ireland. 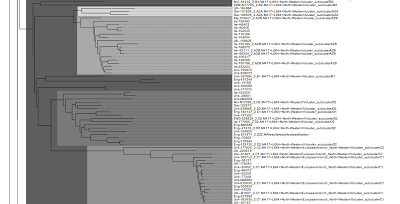 Next, the Z92+ cluster emerges with people mostly from Eastern Europe. 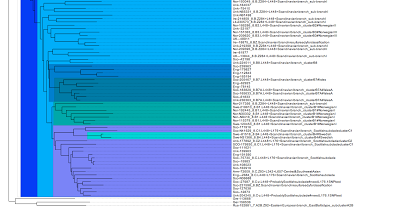 If you are getting confused by all these abbreviations, then this is okay. For clarification, I can recommend this schematic tree made by Michal.
http://eng.molgen.org/download/file.php?id=237&mode=view