I had some discussions about how the typical Balkan Turk and later how the typical Anatolian Turk would look like. Since the detailed ancestry of most tested Turks is unknown I was looking into other sources and methods. Onur, one of the readers of my blog help me by mentioning:

So, I took at the corresponding infromation in the Dodecad project, the ChromoPainter/FineSTRUCTURE analysis of Balkans/West Asia.

The analysis revealed 25 "populations" in the data set (pop0-pop24), two of them are the most interesting for now:
Dienekes wrote:
The great thing is that Dienekes also published the K12b Admixture components of pop10 and pop13. This is can help us to find the best candidate for Anatolian Turks. I also included K12b results of Turks from Hodoğlugil & Mahley (2012).  So, I calculated the TOP30 closest matches for pop10 (Balkan-Anatolian Turkish) and pop13 (Anatolian Turkish). 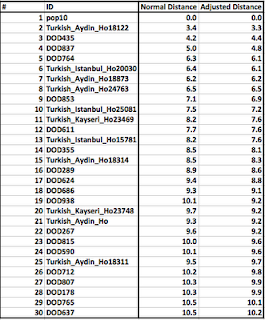 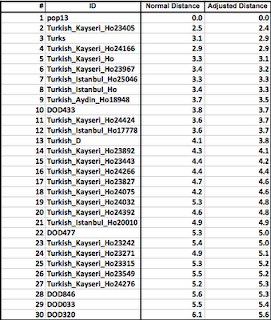 The best match for pop22 of the Turkish Dodecad participants is DOD287.
Posted by Palisto at 5:08 PM