Davidski from Eurogenes Genetic Ancestry Project was so kind to focus on the Kurdish and Assyrian samples in his latest update of the project and compared them with available autosomal data of 23 populations. For this he used a program called SupportMix that helps determining ancestral origin of genomic segments.

For those who are interested in the who is who: Here is the key for most Kurds


Update:
The given names of the segments are somehow surprising, anyways, here is the summary of the first 5 chromosomes. Note: Calculated percentages take into account the different sizes of each chromosome. 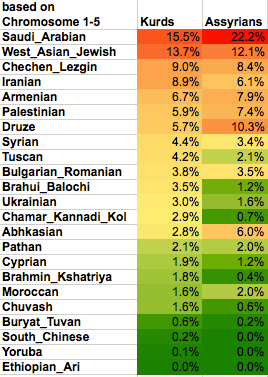 I also sorted it by region: 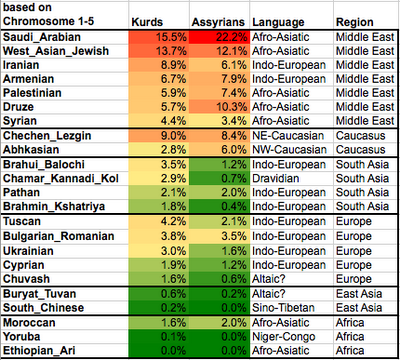 Please note the higher percentages of Kurds for Iranians, Europeans and South Asians (mostly Indo-European). The Northeast Caucasian connection is stronger for Kurds, while the Northwest Caucasian connection is much stronger for Assyrians. Even though the signal for Northwest Caucasian is not strong, this is something I have seen in the Y-Chromosome, too.
Y chromosome of Kurds in Iran
Kurdish Y chromosomes of a Central Anatolian village

Now, all chromosome are analyzed, here are the results, sorted by region: 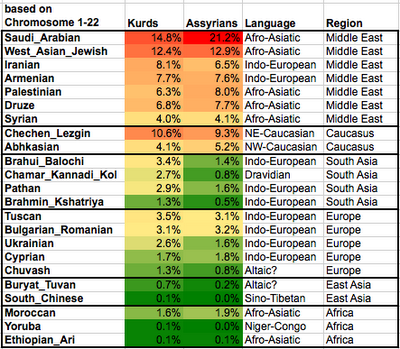 Overall, Kurds and Assyrians are pretty similar, the previously observed differences (see above) shrinked, e.g. the higher percentages of Kurds for Europeans shrinked, the difference compared to Assyrians is only obvious for Ukrainians, the values for "Tuscan" is nearly the same. The clearest difference can seen for "Saudi_Arabian" and for South Asia.  The Northeast-Caucasian signal is pretty high for both.

Thus, I decided to show the same analysis but sorted by the differences between Kurds and Assyrians. 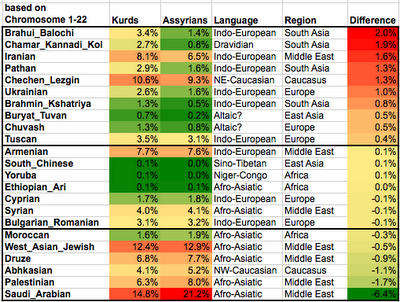 Interestingly, Assyrians are not closer to Armenians, Syrians and Cypriots as previously stated elsewhere, suggesting a complex ancestry of these populations without a clear Semitic domination in the past.

Summary:
Kurdish ancestors have seen more of the world.
Posted by Palisto at 11:07 PM