Today, I want to present the STR111 tree of haplogroup G, and I used the same method as before.

Haplogroup G is quiet common in the Caucasus region and neighboring region, however, it also reached Europe in ancient times. The most famous European individual with haplogroup G is Ötzi the Iceman who lived 3,300 BCE in South Tyrol.
Different subbranches can be found in presented trees below:
- G1 (blue) is dominating in the Middle East
- G2c (purple) is a very narrow branch with very little STR variability. Haplogroup G2c is mostly found in Eastern Europe (Poland, Lithuania, Belorussia)
- G2a1a (dark yellow) is dominated by individuals from North Ossetia and Georgia (probably South Ossetia). Joseph Stalin has this haplogroup.
- G2a3b1 (orange) is the most commonly tested subbranch of haplogroup G. G is found from Caucasus to Ireland and from Caucasus to the Arabian Peninsula. 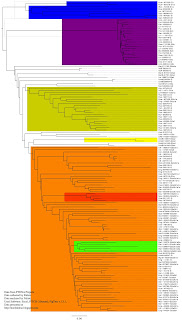 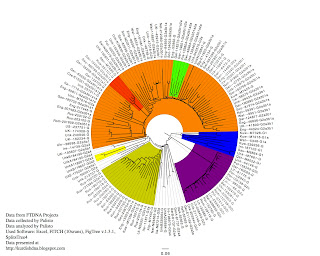 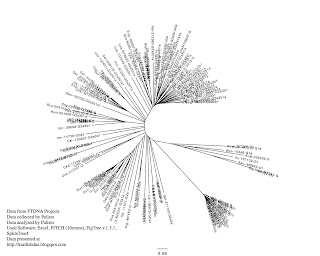 Contrary to others, conclusions based on haplotype trees, even at STR111 level, are mostly erroneous and heavily influences by subjective believes. Sometimes, these trees do not fit perfectly with haplogroups, sometimes they do. I don't want to participate in such guesstimates, I let the trees speak for themselves, and most of my comments are primarily descriptive.
Posted by Palisto at 11:49 PM